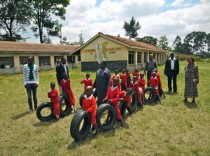 
At a time when so many schools in the UK and elsewhere have become obsessed with academic attainment (as if it were in itself an end goal), we have become particularly interested in the concept of Character Education and the part that it should play in preparing young people for the tests of life - as opposed for a life of tests.  The development of the right character traits is key to personal and professional success, to enabling young people to become good citizens and good performers.

In this context Aureus has developed a Character Education programme for the East Africa Cricket & Education Foundation in which cricket and competition are the means by which the charcateristics that matter most can be developed.  We are also working with others to develop a broader programme through which Character Education can be delivered through sport more generally.